Terry is a co-author of the 1993 book Certain Victory, the US Army in the Gulf War. This official US Army document was first published by the Government Press, then by Brassey's McMillan. The other authors are Robert Scales, Major General, US Army Retired, and Thomas Odom, Lieutenant Colonel, US Army Retired. This work began in November 1991 under the direction of the Chief of Staff of the Army, General Gordon Sullivan. Then Brigadier General Scales headed up the team that eventually consisted of 16 writer/researchers and a support staff. Scales named Terry his deputy and one of the co-authors. The project included a documentary video produced and scripted by Terry with team members Bryant Hammacker and Jack Pagano (videographer).

Terry's first novel, published in 2005 by Authorhouse, is Valiant Volunteers, A Novel Based on the Passion and Glory of the Lafayette Escadrille. This historical fiction novel tells the story of the real 38 Americans who made up the Lafayette Escadrille, or Squadron, a pursuit unit under French officers with American pilots that saw action from April 1916 until February 1918. Terry's extensive research began before his retirement from the Army in 1995 capitalizing on his fluency in French and his two tours of duty in France with the Army. The novel begins in 1914 shortly after the First World War, then known as the Great War, began. It ends in April 1917 with the entry of the United States into the war.

The sequel to Valiant Volunteers is in progress for release as soon as 2015. Titled The Valiant and the Vanquished, the sequel continues the story of the Lafayette Escadrille through 1917 until the unit is absorbed in February 1918 as the 103 Pursuit Squadron of the US Army. It continues to follow the real and fictional characters of Valiant Volunteers through the end of the war in November 1918. 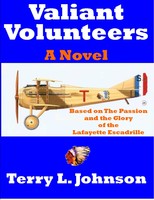